:
: These were often used by groups staging rallies (which might
: explain the number on the back, as the rally sanctioning group
: would have had a set of these timers). Also, when the boxes are
: closed, it becomes more difficult to adjust or manipulate the
: clock / stopwatch, so that the folks handling the rally event
: may not provide improper assistance to particular competitors.


In the UK there was a business that would rent a rally organiser a set of watches for the event. I recollect sitting with such a pile setting them to the times I had worked out for the marshal stations early evening just before the event. They would then be handed out to the marshals before they drove to their positions. An event at the level of this illustration would be pretty much run to the legally required maximum 30mph timing, but further up the competition chain the times would be manipulated to raise the speed, as I did to a couple of these. Fastest I ever competed in as a navigator was set to 45mph on some sections -- on mountain roads in Wales. 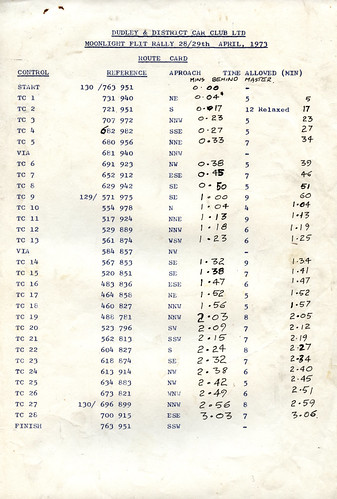